skip to main | skip to sidebar

It's easy to see why the locals call the Erasmus Bridge in Rotterdam "The Swan." But it may be too timid a metaphor. The structure's grace and beauty far outshine that creation of nature. 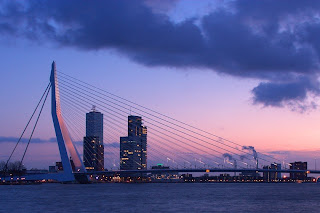 The Erasmus is a design known to bridge aficionados as 'cable stayed'. A series of thick, ultra-strong steel strands reach from the tip of the pylon (the swan's 'neck') to the roadbed below, looking like nothing so much as a set of taut piano wires. Like a cross-beam on a swinging gate, those cables resist the downward forces on the road.

Bridge building has undergone something of a renaissance in recent decades, thanks in no small part to the work of Dr. Tung-Yen Lin of Berkeley.

During his seven-decade career he taught or was directly responsible for numerous innovations, not the least of which was his promotion of pre-stressed concrete in building structures, now ubiquitous. He used the technique in building his own home, which featured a 1,000 square foot interior space free of supporting beams. (He used the area as a ballroom to dance with his wife.) Dr. Lin passed away in 2003 at the age of 91.

One of his most beautiful creations is the stunning Ling-Tie bridge in Nanning, China, completed after his death. Resembling a rounded harp, it provides a fascinating design variation that combines an arch with cable stayed features. 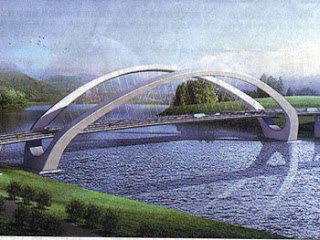 Only two out of dozens of spectacular monuments to genius, these bridges demonstrate that the great age of building is far from over. While they get less fanfare than in generations past, they remain some of man's greatest achievements.
Posted by Jeffrey Perren at 8:57 AM

He used the technique in building his own home, which featured a 1,000 foot interior span free of supporting beams. (He used the area as a ballroom to dance with his wife.)

It includes a 1,000-square-foot ballroom, where Professor Lin and his wife spent nearly every weekend waltzing.

Boy, that was a very dopey mistake on my part. Normally my brain is a little better engaged. Nice catch. Corrected.

Jeffrey Perren
Fort Worth, Texas, United States
Jeffrey Perren is the author of "The Hanse Rival, and other novels from ClioStory Publishing.